*drum roll*… it’s time for my first walking journey around London! Today my first route as I delve into the city’s sights, history and beauty, takes me from Victoria Station right up to Green Park. On my walk I’ll be taking in the wonders of St James’s Park, go along The Mall, pop by Buckingham Palace before finishing in Green Park.

I start my journey at London Victoria Station, the second busiest terminus in London and the UK after London Waterloo. It connects the city to the South, Gatwick Airport with access to the District, Circle and Victoria tube lines. Officially opened in 1862, Victoria is named after nearby Victoria Street, with the latter named after Queen Victoria. Today it’s in midst of a major redevelopment project including a new underground ticket hall due for completion in 2018.

A walk along Buckingham Palace Road (sit tight we aren’t going to the palace just yet!), takes me to the oldest of London’s eight Royal Parks, St James’s  Park. 470 years ago the park was mainly farmland and woods with its name coming from the leper hospital that used to be there.

The site was acquired by Henry VIII in 1536 who created a deer park and built a hunting lodge which later became St James’s Palace. In 1603, the King, James I, drained and landscaped the park and when Charles II became King in 1660 he ordered the park to be redesigned by Frenchman André Mollet. King Charles introduced the game, Pelle Melle, from France to the courts of St James’s Park which gave names to the present day Pall Mall and The Mall.

In 1820s the park got a complete makeover with the canal becoming a curved lake, new winding paths and shrubberies. Prince Regent, later George IV, commissioned Buckingham House to be enlarged and The Mall tuned into a grand processional route. This was the start of many of the cities best-known landmarks being created. John Nash, an architect and landscaper oversaw the designs which were completed in 1827. The park we see today is still very much as Nash designed it.

To get from one side of the park to the other you take a quick walk over The Blue Bridge. This was first designed by John Nash and replaced by a suspension Bridge in 1857 with the one we use today dating back to 1957. The views from the bridge across the river are simply stupendous, on one side you have Buckingham Palace, and other Whitehall, Horse Guards, and the London Eye .

To get to Buckingham Palace a short walk along The Mall is required.

The walk down The Mall leads you to one of the most iconic and recognisable places in the world! Buckingham Palace has been the UK’s sovereigns residence since 1837 and is the headquarters (an office!) for the Monarch, Queen Elizabeth II . The palace has 775 rooms including 78 bathrooms, 52 royal & guest bedrooms and 92 offices. It’s 108 metres long, 120 metres deep and 24 metres high. Quite simply, one of the hottest tourist attractions there is!

As I leave the splendour of Buckingham Palace, I come towards the end of my journey as I reach another of London’s Royal Parks, Green Park. Whilst St James’s is London’s oldest Royal Park, Green Park is the smallest comprising of 40 acres of trees and grassland dating back to 1554. It may be small, but what it does have is a big personality of beautiful greenery (as expected with the name!). 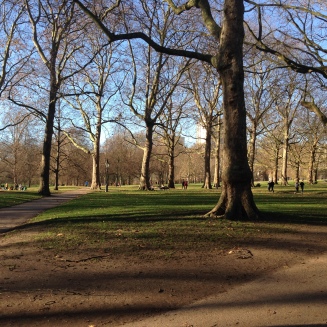 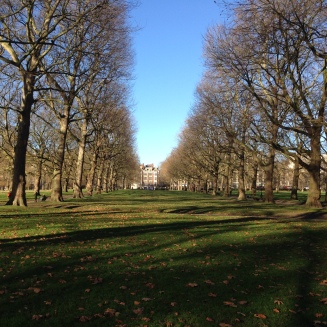 It has been a lovely stroll through some of central London’s beautiful scenery and historical sights, and incredible to think that they’re all just a stones throw away from each other!

Hope you’ve enjoyed my journey, and stay tuned for more walks soon 🙂 Don’t forget to follow the blog, Twitter & Instagram accounts, and leave your comments below!