A warm welcome to a new week, and a new walk! This instalment takes me from the iconic St Paul’s Cathedral past the financial district of Bank before finishing in Finsbury Circus in Moorgate. So grab your boots, and let’s get walking!

My journey begins at St Paul’s Cathedral which has had a dedication to Paul the Apostle (St Paul) on its site since AD 604.

The cathedral we see today is at least the fourth to have stood on this site. It was created by one of Britain’s most famous architects, Sir Christopher Wren between 1675 and 1710, with its predecessor having been destroyed in The Great Fire of London in 1666. 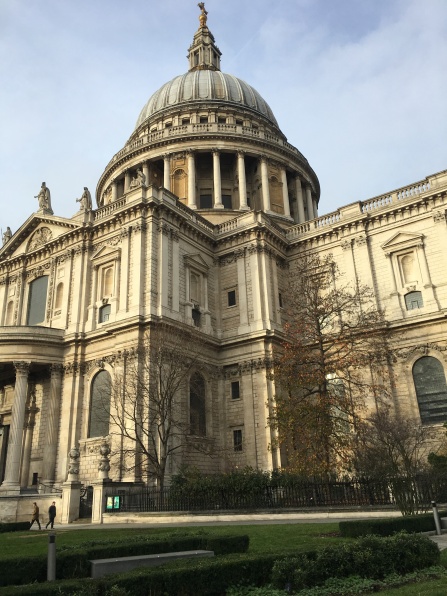 The cathedral stands at 365 feet (111m) high which made it the tallest building in London from 1710 to 1963… which is remarkably small when you consider The Shard is the tallest building now at 1,016 feet (309.6m)! After Liverpool Cathedral, St Paul’s is the second largest church building in the UK, and has one of the most distinctive domes in the world. 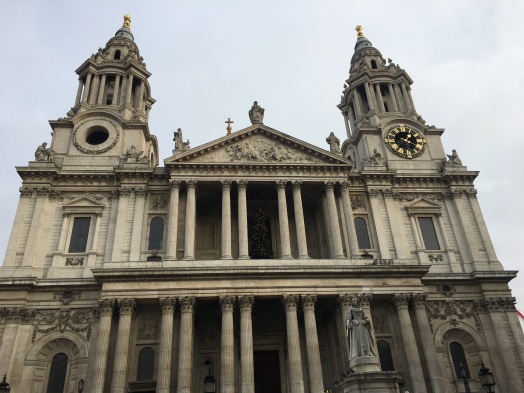 The area surrounding St Paul’s is steeped in history and sights too, with the Paternoster Square sitting opposite the cathedral. It can trace its origins back to medieval Paternoster Row, where St Paul’s clergy would hold rosary beads and recite the ‘Paternoster’, or Lord’s Prayer (Paternoster translates as ‘Our Father’) whilst walking through the area.

The square is 70,000m² of office space, retail outlets and cafés. Standing at the entrance of the square is the Temple Bar arch, which was constructed by Sir Christopher Wren between 1669 and 1672. Its name derives from the gateway’s original position near the Temple Law courts, and displays its four original states  (Charles I, Charles II, James I and Queen Anne of Denmark), and was carved by John Bushnell.

It was one of the eight original City gateways – the others being Aldgate, Aldersgate, Bishopsgate, Cripplegate, Ludgate, Moorgate and Newgate.

The Temple Bar Gate is actually the only one of these gates that has survived, with the others being demolished by the end of the 18th century. However, by 1878 it had become too expensive to maintain and caused traffic congestion. This lead to it being dismantled. Though in 1880, Sir Henry Meux bought all the stones and rebuilt it as a gateway to his park and mansion at Theobalds Park (located between Enfield and Cheshunt).

In 1984 the gates were purchased by the Temple Bar Trust from the Meux Trust, and in 2004 it was returned from Theobalds Park and re-erected at the entrance to Paternoster Square.

Another notable landmark in the Square is the Paternoster Column, which stands at 23.3m tall, and was erected in 2008.

Comprised of a hexagonal stone base, a fluted Corinthian column and a glided copper urn, it was designed to be the ‘centre of gravity’ for the entire Paternoster development. The structure is a recreation of those designed for the west portico of the old St Paul’s. Also the London Stock Exchange is located within the square, which was founded in 1801.

From Paternoster Square and St Paul’s I take a short walk to a rather pleasant area known as Festival Gardens.

First laid in 1951 by Sir Albert Richardson for the Corporation of London’s contribution to the Festival of Britain, it’s based over once bomb damaged land from the Second World War.

The gardens include a wall fountain, which was a gift from the Worshipful Company of Gardeners. Erected in 1973, the sculpture in the garden is that of ‘The Young Lovers’ by George Ehrlich.  The gardens provide a perfect view of St Paul’s and across the rest of the surrounding area! 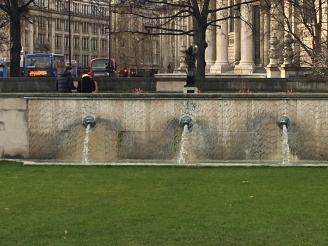 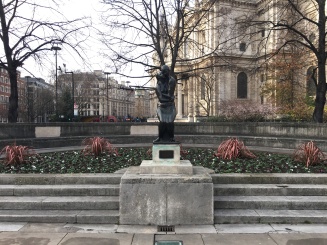 The Young Lovers sculpture
From the tranquil gardens and splendour of St Paul’s, my walk takes me onto my next destination, Bank! Within the vicinity of the Bank area, there are three famous monuments, Mansion House, the Royal Exchange, and the Bank of England.

The Mansion House was completed in 1758 as a residence for Lord Mayors to undertake their work as heads of the City’s governmental, judicial and civic duties. Before the Mansion House was constructed they used to have to do these functions in their own houses or halls, a true Working from Home initiative!

Designed by George Dance the Elder, this Grade I listed building is in the heart of the City, right next to Bank tube station. Today, the house has a collection of plates and art including sculptures and 84 Dutch paintings of the Harold Samuel Art Collection.

Just a slight stroll from the Mansion House takes me to another synonymous financial part of Bank, The Royal Exchange. The origins of The Royal Exchange date back to 1566 when a wealthy merchant by the name of Sir Thomas Gresham established London’s first purpose-built centre for trading stocks. Its design was based on the world’s oldest financial exchange, the Bourse in Antwerp, Belgium.

It was officially opened by Queen Elizabeth I in 1571, and one thing to note is that if you ever wanted a drink there, you could, as it was awarded a license to sell alcohol! Two additional floors were added to the original trading floor in 1660 to house retail businesses. However, in 1666, The Great Fire of London destroyed it, and it took three years for it to be reopened. The 1669 site was designed by City surveyor Edward Jerman. 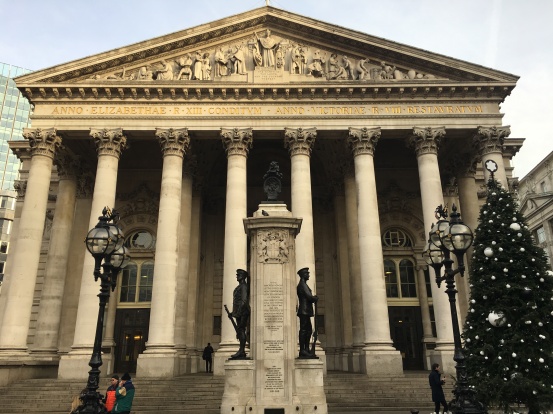 Amazingly, and by a shocking coincidence, the new Royal Exchange was destroyed by a fire too in 1838, which was most likely caused by an overheated stove in Lloyd’s Coffee House on nearby Lombard Street… talk about bad luck! It was certainly third time lucky in 1844 when the current Royal Exchange was built and designed by Sir William Tite.

Traders moved out of the building after the Second World War which left it disused for several decades. The London International Financial Futures Exchange moved into the building in 1982 which meant trading returned there. By 2001 architect Aukett Fitzroy Robinson remodeled it and turned it into a luxury shopping and dining destination. Today, The Royal Exchange is one of London’s leading landmarks, which has kept its retail theme with boutique shops and dining offerings.

To the side of The Royal Exchange sits The Bank of England which was founded in 1694, and was initially to act as the Government’s banker and debt manager. It’s the central bank of the UK, with its Monetary Policy Committee responsible for setting the economy’s Base Rate and Interest Rates.

Back in 1688 there were calls for a national or public bank to mobilise the nation’s resources, given that businesses were flourishing, though money and credit systems were weak.

Scottish entrepreneur William Paterson invited the public to invest in a new project, and in just a few weeks, £1.2 million was invested to form the initial capital stock of the Bank of England. This was lent to the Government in return for a Royal Charter, which was sealed on the 27th July 1694, and the Bank became the Government’s banker and debt manager.

During the 1920s and 1930s, the Bank was redesigned by Sir Herbert Baker, whilst surviving several bombs during the Blitz. In 1946 it was nationalised and subsequently came under the ownership of the Government, rather than private stockholders. Full responsibility for monetary policy was transferred to The Bank of England in 1997. Today, as well as being the UK’s central bank to maintain monetary and financial stability, a free museum of its history is inside too.

After taking in all that financial jargon, it’s time to get some peaceful rest! And my final location of today’s walk can provide just that, as I head to Finsbury Circus in Moorgate.

The gardens were created in 1815 by William Montague and George Dance the Younger on the site that was originally part of Finsbury Manor. A campaign led by Alpheus Morton to make the park public succeeded in the early 20th century, having been a private space for the surrounding buildings.

The bandstand in the gardens has been there since 1955, though currently the area behind it is being used as a major construction site for Crossrail.

I’ve seen how The Great Fire of London played its part in the reconstruction of some of the capital’s most iconic buildings, and how London’s banking district plays its part in both the City’s and the UK’s history.

62 thoughts on “St Paul’s Cathedral to Moorgate: The Influence of The Great Fire of London”