Welcome one and all 🙂 Last week my walk ended in Italian Gardens, and the theme of Italy continues as this week I start in Venice, well Little Venice! No Italian adventures just yet! I’ll then go along my favourite stretch of water, the Regent’s Canal, before going past The Liberal Jewish Synagogue and St John’s Wood Church. In between that I’ll be passing by Lord’s Cricket Ground and ending at a musical landmark, Abbey Road. So, let’s begin the journey!

Located near Paddington and Maida Vale, Little Venice is a scenic and very picturesque riverside area. Its history can be traced back to the 1810s when a pool was created where the Regent’s Canal and the Paddington arm of the Grand Junction Canal met. Back then it was known as the Paddington Broadwater. 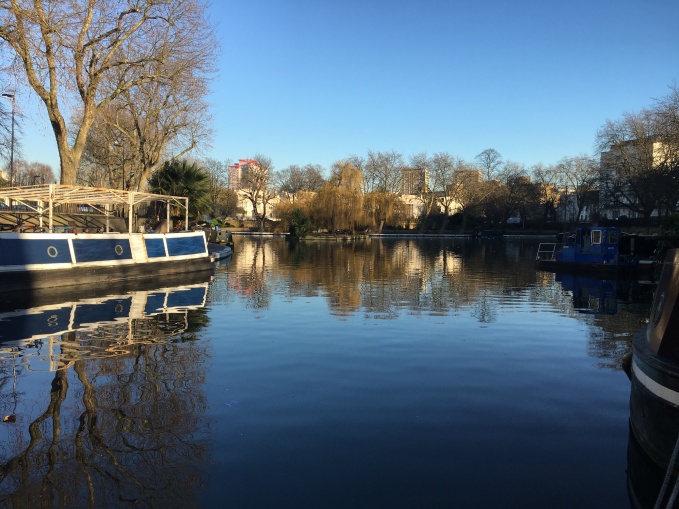 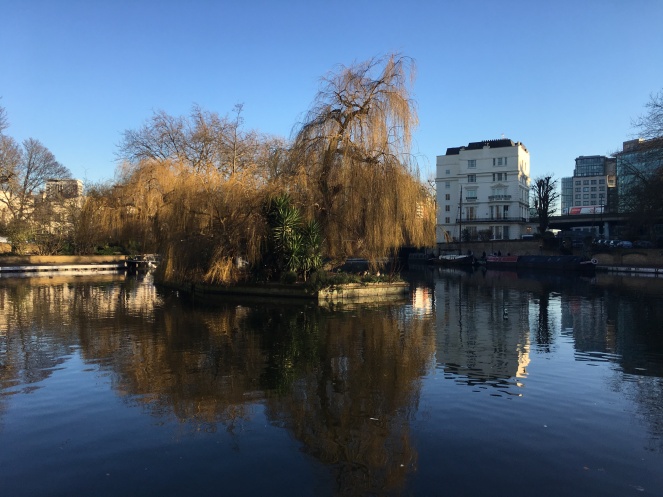 There are a couple of accounts as to where the name ‘Little Venice’ was coined. One of which was from poet Lord Byron who compared this area of Paddington to Venice. An alternative origin came from another poet Robert Browning. He referenced it while living in nearby Warwick Crescent between 1862 and 1887. This lead to the island in the middle christened Browning’s Island. It wasn’t until after the Second World War that it became Venice, and the 1950s until it was known as Little Venice.

The surrounding affluent area has large houses with notable residents including entrepreneur Richard Branson and singer Robbie Williams. Around Little Venice you can find riverside cafes and restaurants whist enjoying venues such as the Canal Cafe Theatre and the Puppet Theatre Barge.

By the bridge in Little Venice sits the offices of the Canal & River Trust who’re a charity that’s responsible for taking care of 2,000 miles of waterways across England and Wales. And who we have to provide great appreciation to for the wonderful canal walks we have within London!

From peaceful Little Venice I take a walk along the Regent’s Canal past the boats and bridges of London’s loveliest riverside views. 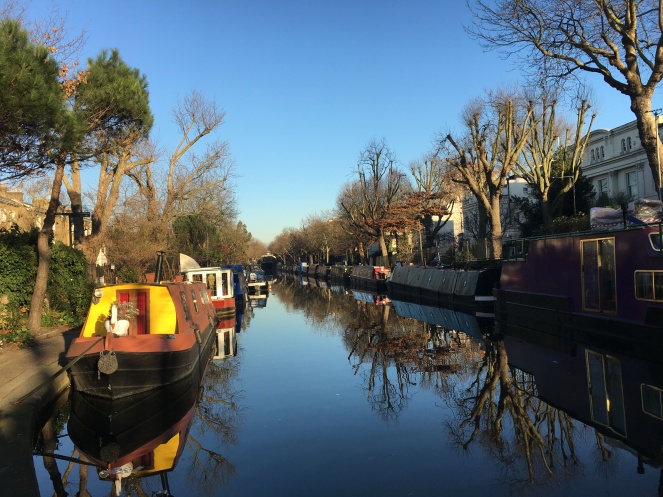 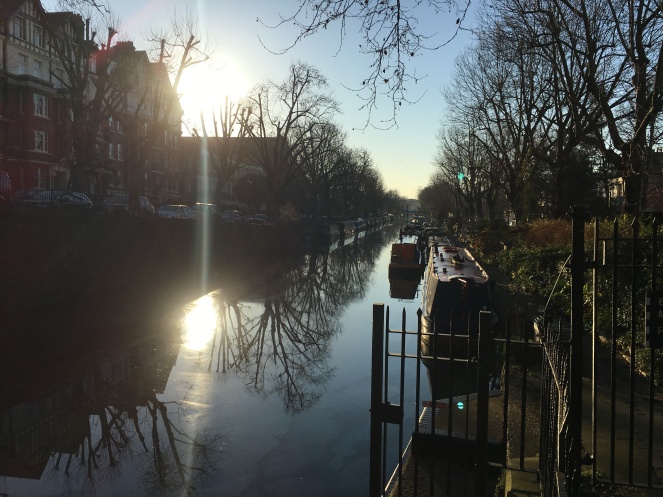 Walking along this stretch of water you could easily feel like you’re in Amsterdam, with the picturesque plants and pathways. This is the kind of walk that you can enjoy on either a cold winter’s day, when I went on it, or just as much on a warm summer’s day. I think every great walk, not just in London, has to have some form of river or canal in it. Over the weeks and months that I’ve been walking, there have been, and will be, walks that form a lot of the Regent’s Canal. These have so far included King’s Cross to Hampstead Heath and Mile End Park to London Fields!

It’s time to say goodbye (not to the walk, don’t worry..!), but to my canal walk as I continue my journey to Abbey Road.  As I do this, I passed this beautiful estate in Maida Vale! Imagine living in or even opposite it!

My walk takes me past this rather lovely and distinct building which is The Liberal Jewish Synagogue. Founded in 1911, it’s the oldest and largest Liberal Synagogue in the UK.

Opposite it is probably the most famous cricket ground and well-known sporting venues in the world, Lord’s Cricket Ground! Now being a fan of cricket, this stop on my walk is extra special!

Known as the ‘Home of Cricket’, Lord’s Cricket Ground’s history can be traced back to 1787 when the Marylebone Cricket Club (MCC) was founded. Before a ground was built aristocrats and nobleman would play cricket in White Conduit Fields in Islington. However, as London’s population grew and the need for more space so crowds could watch them play, they approached White Conduit CC’s bowler, Thomas Lord. They asked him to create a new private ground.

Lord was an ambitious entrepreneur and leased a ground on Dorset Fields in Marylebone. It staged its first match between Middlesex and Essex on the 31st May 1787, and the Marylebone Cricket Club was formed. A year later the Laws of the Game were laid down, which notably referenced the size of the pitch (22 yards), and how players could be given out. Even today the MCC still remains in charge of the Laws of the Game across the entire world.

The MCC located to Marylebone Bank near Regent’s Park between 1811 and 1813, before moving to the ground we see today in St John’s Wood in 1814. Today, the ground is home to Middlesex County Cricket Club and hosts England national matches. It also hosts many corporate events as well as the game of Real Tennis.

Walking past the ground you see the W. G. Grace Memorial Gates which were erected in 1923, and gained Grade II listed status in 1996. Designed by architect Sir Herbert Baker they were a tribute to W.G. Grace, who is widely regarded as the pioneer of the game and one of the greatest ever players.

Along the outside of the ground you come to the Bicentenary Gates which were presented by the Duke of Westminster in memory of Viscount Cobham in 1987.

From cricket to churches, as my walk takes me to St John’s Wood Church which was designed by architect Thomas Hardwick and completed in 1814. When the Church opened the celebrations were held within the new Pavilion at Lord’s Cricket Ground!

Within the roundabout opposite the church sits the St Mary-le-Bone War Memorial which is a tribute to the men and women who sacrificed their lives in both World War One (1914-1918) and World War Two (1939-1945). The bronze statue is of St George in full armour on horseback slaying a dragon and was dedicated in 1936.

It’s now time to move onto my final destination today, and quite possibly the world’s most famous crossing, Abbey Road! The Abbey Road Studios began their life as a sixteen-room house and were bought by EMI in 1929. They opened in 1931 with many different studios to accommodate all the varieties of musicians that used them, from orchestras, to string quarters, to soloists.

The Beatles were signed by EMI’s Parlophone label in 1962, and made their first recording in the studios in the same year. Ninety percent of their recordings were done in the Abbey Road Studios. Other notable artists who recorded there were Pink Floyd, Cliff Richard, The Hollies, and even scores for four Star Wars films!

However, the studio only gained fame when The Beatles named their second-to-last album Abbey Road which was released in 1969. Its cover has become one of the world’s most recognisable images. This iconic image sees  John Lennon, Paul McCartney, George Harrison and Ringo Starr walking across the zebra crossing outside the studio.

Originally, the plan for the album cover was to charter a private jet to the Himalayas and shoot it at foothills of Mount Everest. However, EMI were so desperate to get the product out they went for a simple option of doing the image outside the studios. The photo was taken by Iain Macmillan on a ladder in the middle of the street whilst a policeman stopped traffic.

It was photographed at 11.30AM on the 8th August 1969, taking 10 minutes to do! Far more cheaper and simpler than their original plan! Did you know that six photos were taken, and it was the fifth one that was used. Also the guy in the background by the car was an American tourist called Paul Cole, who didn’t even know it was The Beatles!

In 2010, however, the cash-strapped EMI were considering selling the studios, but a few days later it was awarded Grade II historical status to help preserve it. Today, the crossing is a huge tourist attraction with many taking photos of themselves walking across it like the Fab Four did. And whilst I was there taking my pics, many frustrated drivers went past with people standing in the middle of the road! It’s a strange feeling when you’re there as you don’t really feel like you’re next to a historical landmark, but its musical significance is massive. 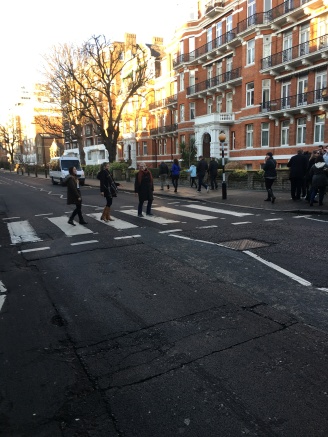 It has been a walk where I’ve seen the beauty of Little Venice and stopped by landmarks of the sporting and music world’s! I hope you had a great time joining me on my walk, and please let me know your thoughts below, I’d love to hear them! For more of the London Wlogger you can give me a follow on Twitter, Instagram and Facebook, and don’t forget to sign up to my blog too 🙂

Stay tuned for another walk through London next week!

All photos taken by London Wlogger, unless photo credit given © Copyright 2017